After 3 years of research and development, Mamod is excited to announce the launch of the new Mamod Stirling Locomotive. Named after the Scottish engineer, Mamod had ambitious plans to make this engine one of the most technically advanced of all Mamod locomotives. And it has not disappointed.

Mamod purchased new machinery so that we could design more technical components in-house. As a result, we could ensure the highest quality control over the entire manufacturing process. Consequently, we revisited the original designs of the Stirling, to see what improvements could be made with our new manufacturing capabilities. This large engine required lots of power. We achieved this by fitting dual 14mm cylinders in addition to a new internal firing poker style to efficiently heat the large 230ml boiler.

Have a closer look at some of the components here.

And here is a flashback to the early days of the Mamod Stirling development. Filmed back in 2017, much has changed in the Stirling design.

If you want to see more about the Mamod Stirling, hop over to the product page now. 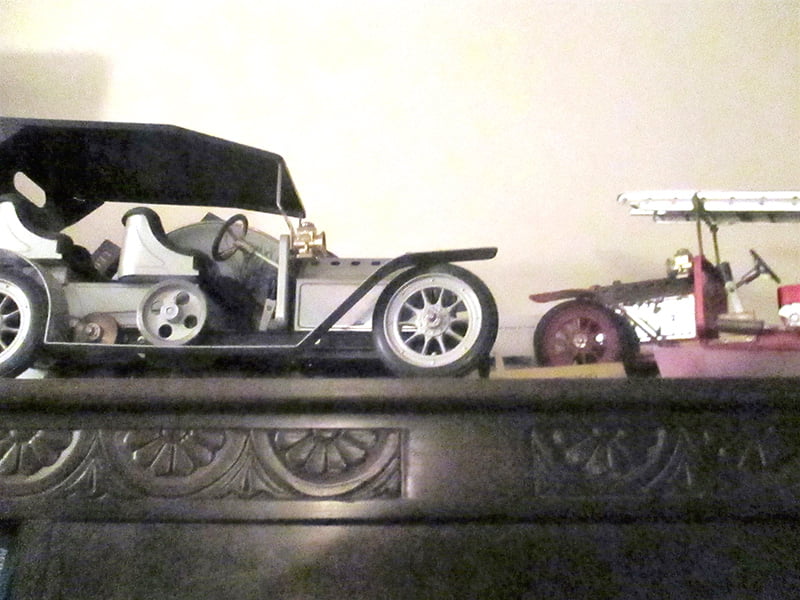 I was 6 years old when my sister and I got our first Mamod steam engines, gifted to us for Christmas by our father. In the true nature of kids at Christmas, we tore open the boxes containing our gifts. As we revealed our very first steam engines, our first reactions were not that of wonderment and awe but of typical sibling rivalry as we began squabbling over whose engine was best – and of course by best, we meant biggest! My sister had been given a silver limousine while I had received a fire engine… I had won! We poked and prodded at them a bit, removing the canopy and extending the ladder but it was certainly not how my admiration for steam ignited. After a demonstration from my father of how to fill the boiler and fire the engine, we watched as they chugged round in their faithful circles and all too quickly, they were placed on a shelf and began their next 20 years of gathering dust.

This may not be the common story told frequently among steamers but that is perhaps why the past time of model steaming has been kept alive throughout the generations… because it hasn’t been relying on the likes of me. Very much apart from yours truly exists a population of enthusiasts who have dedicated many years to this traditional pastime. One thing made apparent to me was the level of involvement and devotion it takes to be a steam enthusiast, the evident dedication is on a par with hobbies of a much larger scale. Most hobbyists will start off small, perhaps a hand me down engine or a Christmas gift as I was given. But for many this is simply the beginning of a lifelong captivation. During the course of my involvement with Mamod, I have been lucky enough to have contact with some of these enlightening people and I have even had the opportunity to meet a few.

Callum was one such child who was given the gift of steam by his father at the tender age of seven. Callum kick-started his hobby with a 1988 TE1A and ten years on he still nurtures this enthusiasm for steam. He has amassed a total of six engines in his collection. Callum told us of fond memories he has of him and his father, working on an old SE2A which still “runs like a champ”. From an early age father and son would work on engines together and with a little work, the pair managed to get an old TE1A steaming for the first time. Callum also has an impressive eye for photography and has shared with us some striking pictures which we will be sure to publish for you all again.

One of the events I was lucky enough to attend was the Winterbourne House Traditional Toy fair which was organised by Lee, the curator of Winterbourne and Mamod fan. Lee falls into the pool of people who picked up the hobby in the more recent years and in this short time, has collected around 25 Mamod models. Confessing a love for pre-war machines, he was originally drawn to the Traction Engine. It is a pastime he is lucky to share with his son who was in the process of creating a wood yard diorama which uses a traction engine to drive the saw. The main appeal of Mamod for Lee is the company’s embracing of yesteryear and bringing some much loved engines back to life. The steaming hobby offers Lee a distraction from his busy work life and a chance for father and son to spend time together doing what they love.

Whether it be the “heart-warming fuzzy feeling” as described by Callum or the “desire to learn a new skill and take a trip down memory lane” as suggested by Lee, the world of steam is about more than engines. It’s about traditions, nostalgia, a community founded in shared passions. For me personally, it’s about a growing respect for those that I’ve met and those I continue to work with and I am very grateful to be involved.