After 3 years of research and development, Mamod is excited to announce the launch of the new Mamod Stirling Locomotive. Named after the Scottish engineer, Mamod had ambitious plans to make this engine one of the most technically advanced of all Mamod locomotives. And it has not disappointed.

Mamod purchased new machinery so that we could design more technical components in-house. As a result, we could ensure the highest quality control over the entire manufacturing process. Consequently, we revisited the original designs of the Stirling, to see what improvements could be made with our new manufacturing capabilities. This large engine required lots of power. We achieved this by fitting dual 14mm cylinders in addition to a new internal firing poker style to efficiently heat the large 230ml boiler.

Have a closer look at some of the components here.

And here is a flashback to the early days of the Mamod Stirling development. Filmed back in 2017, much has changed in the Stirling design.

If you want to see more about the Mamod Stirling, hop over to the product page now.

A great Brunel review! It is always a pleasure to hear from our customers, especially when they send us great feedback from so far away. Dave got in touch with us to let us know how the Mamod Brunel got the ‘steam’s up!” from across the pond. Thanks for taking the time to tell of your experience. Read below for the full Brunel review.

“I have been running your Brunel locomotive for some time now with compete satisfaction. At the National Summer Steam Up in California I ran the Brunel with 30 to 40 ponds psi., with about thirty minutes of run time and thought that was great.

I have just returned home from the International Small Scale Steam Up in Diamondhead, Mississippi. I usually bring two or three locomotives, but this year I only brought one, the Brunel and after running it for three days, I started steaming up the engine with a high burn rate, and then backing it down after blowing the safety, and found that the Brunel would run very well at just ten pounds psi. I was getting fifty + minutes with just adding water, no fuel.

Everyone loved it, and asks me what that thing was, I told them that it was a Mamod Brunel. I guess that no one had ever seen one up close before. I received the track hog award from a fellow live steamer , because of all the time Brunel was on the track.

I may be looking for another Brunel to made into a box cab locomotive.

Thank you for a great locomotive.

See the Brunel here for more details and specifications. www.mamod.co.uk/shop-categories/brunel

Building a model steam boat can be a real labour of love with many people spending months upon months painstakingly putting it together.

END_OF_DOCUMENT_TOKEN_TO_BE_REPLACED 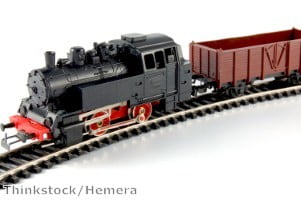 Doncaster has long been deemed as the spiritual home of train travel in the UK.

The south Yorkshire town boasts the famous Doncaster Works site where engines such as the Mallard and the Flying Scotsman were built. The past weekend (February 7th and 8th) saw hundreds of people descend onto Doncaster from all over the country to celebrate railways in all their form – well, the miniature version.

Over 30 intricately-made model trains and railways were on display at the Festival of British Railway Modelling. This year's theme was 'Best of British' and saw modellers depict scenes from the pre-war era right up to before privatisation was introduced in 1995. Both real and fictional settings were on show in a range of scales and gauges.

Held at the Doncaster Exhibition Centre, the event highlighted the creativity involved when it comes to building model railways and scenery. The great thing about model railways is that it allows the imagination to run wild. Among the imaginary stations was Alderford which was described by the creator as a north-west village from the 1980s.

Others included the fictitious town of Florinstone, situated on the Somerset & Dorset Railway between Templecombe and Bournemouth, and Northwick, a seaside resort along the Bristol Channel.

It was not just specialist layouts that were on display as the Doncaster event had a host of rare engines and other kits, parts and accessories. Visitors were able to purchase one of the 13 limited edition 'Cadbury of Bournville' wagons along with a number of other models to add to their own personal collection.

Speaking to the Sheffield Star, Lauren Wright, exhibitions marketing executive, said: “We are extremely pleased how the weekend went, the show was a huge success for all the visitors and those that were there trading, which is our main goal.

"There was a fabulous display of “Best of British” layouts which all the visitors greatly enjoyed."

Saddle Tank engines have long been favourites among the Mamod customer base and this year sees the launch of a brand new model.

It is a poignant release for the company which waved goodbye to a long-standing engine at the end of 2014. The Diamond Jubilee Saddle Tank train was one of the first models that came with technology that allowed users to easily switch between gauges to suit their own set. As a limited edition model it struck a chord with collectors.

Launched to coincide with Queen Elizabeth II's 60th year on the throne, the engine boasted a ruby red livery and was complete with carriages. The final Diamond Jubilee Saddle Tank left Mamod's Smethwick factory in the build-up to Christmas and brought an end to one of the most successful models produced by the company.

With the Diamond Jubilee Saddle Tank now finished, Mamod felt it was time to introduce a new engine. The long-awaited Telford train is expected to be released between late-February and early March but it is now embarking on introducing a new Saddle Tank and rekindle one of the nation's most loved styles of engine.

Mamod has been producing Saddle Tank engines since the early 1980s when it released the RS1 and RS2 in a 0 gauge. The decade saw the release of the RS3, SL1 kit and the limited edition SL6, they coincided with final days of the Malin family's ownership of the company before Terry's came on board.

The 2015 edition of the Saddle Tank is slightly different from the traditional designs that have served Mamod in good stead over the years. Unlike its predecessors the class of 2015 sees a relocation of the oil reservoir seal. Previously this knob has been protruding out the side of the cab but now it sits inside the cab.

Adjustments such as this will continue as the blueprint for all future Saddle Tanks. The decision to go with this style of engine moving forward has been driven by the success of the Diamond Jubilee engine. Mamod explains that it wanted to create a more permanent feature after the demand for the limited edition version had exceeded its supply.

So what is different about the 2015 Saddle Tank? In Mamod's own words the train looks "different, unusual" but it is something which will appeal to a wider audience – something it has been looking to achieve in recent years.

The design process was not as complicated as for other engines, namely the Telford, as the chassis and boiler have a similar layout to the tried and tested Mark II Saddle Tank. Taking elements from previous versions, Mamod was able to create this new engine.

It was not without its problems, however and the company encountered difficulties producing the curved shape of the saddle tank cover. Engineers needed to create the covers by hand and manipulated the shape by a hand drill. The upside of this is that every single Mamod model has received the unique attention of a company engineer.

The release of the Telford train is set to be one of the main highlights from the Mamod factory this year.

It has been a long time coming for a model that was originally pitched way back in 2011. This four-year labour of love has been an absorbing time for everyone on both the design and production side. Mamod has scheduled the Telford to be released at the end of February and the excitement is already building for this latest locomotive.

The Telford train could also represent a new dawn for Mamod in terms of engine production. This model has embraced a new type of piston head which could become a regular feature on future train and steam models from the Smethwick factory. In our second look at the Telford we focus on the technical side of what has become known as the "runaway train" among its engineers.

Mamod has based the design of the Telford on the previously successful Saddle Tank models. It seemed only fitting as the company said goodbye to an old favourite towards the end of 2014. The final Diamond Jubilee Saddle Tank was sold in the build-up to Christmas, bringing an end to the long-running model.

The company has not rested on its laurels and as the final Diamond Jubilee Saddle Tank rolled off the production line, the release of the Telford edged closer. One of the key features of the Telford is Mamod's decision to install a vertical oil lubricator. This has allowed for a greater oil capacity, providing longer durations on a single full tank.

Another new feature is a top up port on the boiler which allows users to refill the engine without having to shut the train down. This innovative point will come in handy for users that are running the Telford as a much wider display. It will also be ideal for demonstrators when showing off their collections at major steam model events.

The piston heads have been the main focus of the Telford's innovation. Engineers have altered the shape of them to suit the needs of this new model. Previous Mamod models had seen the piston heads move back and forth, thus creating a lot of dead steam in the cylinders. The dead steam would not be utilised and this needed to be changed. Mamod's latest design ensures that all the steam is used and helps to increase power.

Mamod have now identified this method as the basis for all future engines. The company wants to install this new piston heads idea on to all of its slide valve range models which will make them much more efficient.

The runaway train – given the name after it was far too powerful during its first test run – is much heavier than many other models and has been increased two fold from the original design. This weight is handled by increasing the thickness of the chassis, it has also decreased the model's centre of gravity and making it more stable.

Having more weight on the axles has also meant that the wheels turn much slower and makes it a more controlled engine.

The Telford will make its debut at the end of February, heading into early March and will be available to purchase for Mamod directly.